This post is part of a virtual book tour organized by Goddess Fish Promotions. Ella Quinn will award a $25 Amazon gift card to a randomly drawn winner. Click on the tour banner to see the other stops on the tour. 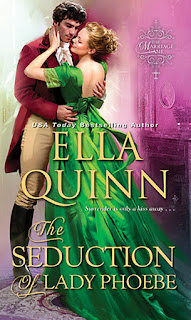 Polite society has its rules for marriage. But for Ella Quinn’s eligible bachelors, their brides will show them that rules are for the faint of heart . . .

Phoebe Stanhope is not a typical Lady. As feisty as she is quick witted, no one can catch her, especially when she is driving her dashing phaeton with its perfectly matched horses. And unlike her peers, experience has guarded her against a growing list of would-be suitors. But when she encounters Marcus Finley, what she fears most burns deep within his blue-eyed gaze . . .

For Lord Marcus, the spark of recognition is but a moment in the love he has held these many years. Now that he’s returned to England, all the happiness he desires rests on Lady Phoebe never finding out that he was the one who turned her heart so cold and distant. He must work fast to gain the advantage—to convince her what she wants is exactly what she denies—but in order to seduce her into his arms, he must be willing to give up more than he can control . . .

As she left the milliner’s shop in Bond Street, looking down to fasten her gloves, she was knocked off her feet. A pair of powerful arms grabbed her from behind to steady her, then, as if she were a rag doll, she was suddenly pulled back against his equally strong hard male body.

Phoebe gasped as the tremor ran down her spine. Her senses seized with some emotion she did not immediately recognize, and she was overcome with a strange desire to melt against the person holding her.

A deep voice, one she’d heard before, lightly cursed inconsiderate boys. At the same time the man appeared to deliberately release her.

Which, to Phoebe’s surprise, was not at all what she wanted.

She turned, to thank her rescuer, and gazed up into the most beautiful pair of blue eyes she’d ever seen. The shade reminded her of the color of the water in paintings of the tropics. Turquoise.

The effect was enhanced by his deeply tanned visage, as he stared down at her. Small lines creased the corners of his eyes, and he smiled with perfectly molded lips.

Phoebe’s breath came fast and she tried to slow her heart, which had decided to dash off madly. Dragging her gaze from his lips, she took in his lean, rugged face, and aquiline nose. A lock of dark sable hair fell over his broad forehead. His eyes warmed the longer he looked at her. He was magnificent.

Phoebe’s arms and back tingled with the memory of his touch.

Why was it she’d never noticed him before?

Marcus had been approaching a milliner’s shop when a youth, running unheedingly down the street, almost hit him. Just at that moment, a young lady stepped out of a shop door. The lad bumped into her, perilously knocking the woman off her feet. Marcus immediately reached out to keep her from falling and almost dropped her altogether.

The moment Marcus touched her arms, his hands shook with a tremor so violent he’d pulled her sharply against his chest, causing an even greater vibration to pass through him. He didn’t even have to look at her to know it was his Phoebe.

Bracing himself for her shock and anger at finding herself in his arms, he slowly, deliberately released her. Lady Phoebe stared up at him and he was lost in her eyes, an intense sky blue. He smiled down and couldn’t let go of her gaze.

Phoebe’s soft feminine curves still made his hands tingle, even though he was no longer touching her.

She returned his smile with one of her own. “Thank you so much for rescuing me. I was quite knocked off my feet.”

Still lost in her, he blinked. She wasn’t running away, and she hadn’t hit him. Good Lord, she hadn’t recognized him. He wasn’t about to set her straight, not yet any way. “It was entirely my pleasure. I am not often able to rescue a damsel in distress.”

Phoebe’s chuckle was soft and breathy. “No, I suppose not, at least not in Bond Street. You must be my knight-errant.”

A position he would gladly hold. “Milady.” He bowed, bringing her hand to his lips. Her fingers fluttered as he pressed a soft kiss on them. He continued to hold both her gaze and her hand after he’d kissed it. This was too good to be true. She didn’t know him. He longed to take her into his arms again. Tell her she belonged with him. But that’s how this whole conundrum began.

Ignoring propriety, she said, “I am Lady Phoebe Stanhope.”

He held Phoebe’s gaze and though she spoke to her aunt, she looked at him. “I was almost knocked of my feet by—by a—a . . .”

His smiled deepened. “A reckless boy.”

She’d given him her name, but if he told her his, she’d leave him.

Nodding, Phoebe kept her eyes on his. “Yes, very reckless, and this very kind gentleman rescued me from falling.”

If Lady Phoebe would allow it, Marcus would ask nothing more than to spend the rest of his life protecting her.

About the Author: USA Today bestselling author Ella Quinn's studies and other jobs have always been on the serious side. Reading historical romances, especially Regencies, were her escape. Eventually her love of historical novels led her to start writing them.

She is married to her wonderful husband of over thirty years. They have a son and two beautiful granddaughters, and a Great Dane. After living in the South Pacific, Central America, North Africa, England and Europe, she and her husband decided to make their dreams come true and are now living on a sailboat. After cruising the Caribbean and North America, she completed a transatlantic crossing from St. Martin to Southern Europe. She's currently living in Germany, happily writing while her husband is back at work, recovering from retirement.

Ella loves when readers connect with her.

a Rafflecopter giveaway
0 0 vote
Article Rating
Previous Post: « Charmed Against All Odds by Betty Bolté
Next Post: CHRISTMAS WITH YOU »

Thank you for hosting today.

Thank you for hosting me!

THE SEDUCTION OF LADY PHOEBE